Our friends at Funcom pulled a funny April Fools prank this year, but as it turns out, Conan Chop Chop is an actual game. Here’s the press release, and by all means read the post on Conan.com too!

On April 1st Funcom cheekily announced the upcoming game Conan Chop Chop as an April Fools’ Day joke. But surprise! Not only is it real, the game will release on PC, PlayStation 4, Xbox One and Nintendo Switch in less than three months’ time!

“… game that is definitively not real, but probably should be”

These were some of the remarks we received from press and viewers when we announced Conan Chop Chop on April 1st. The game was perceived to be an April Fools’ Day joke, but today we set the record straight: The roguelike hack and slash game Conan Chop Chop is very real indeed. So real that it’s going to release on PC, PlayStation 4, Xbox One and Nintendo Switch on September 3rd 2019!

In fact, Funcom and the Australian developers at Mighty Kingdom are proud to announce that Conan Chop Chop will be the most realistic stick figure game ever to feature Conan the Barbarian!

“Keeping this a secret has been a hardship,” admits Funcom CEO Rui Casais. “The feedback we got from fans when we released the April Fools’ Day trailer was amazing and remarkably unanimous, and so I have been itching to give them the good news ever since.”

“But don’t be fooled by the game’s humoristic and quirky looks. There is a lot of hard work being put into this, and the game should thrill roguelike fans and hack & slash fans alike,” says Casais.

The game will support up to 4 players couch co-op and is set in Hyboria, the world created by fantasy author Robert E. Howard more than 80 years ago.

You will be tasked with thwarting the plans of the evil wizard Thoth-Amon, who plans to resurrect the even eviler wizard Xaltotun. If he succeeds, he will condemn the world to an eternity of darkness and enslavement. Only you can stop him, but in order to do so you must use all your cunning. All your guile. You must summon all your courage and swordsmanship. You must … Chop Chop!

Diverse cast to suit your playstyle: Play as Conan, Pallantides, Valeria or Bêlit, all known heroes in the Conan universe.

Diverse word: Explore the desert of Koth, the enchanted Darkwood, the burning slopes of Hyperborea and the icy world of Vanaheim, each with their own deadly dungeon.

Lots of loot: Use everything from a broom to a bastard sword to hack your foes to bits.

Astonishing combos: CCC will feature not only the ability to swing left and right, you will also learn even flashier fighting moves as you progress.

Ruthless bosses: Now is finally your chance to go up against a giant gorilla in a cape! But beware killer boss moves, such as Lava Reflux, Tail Whip and Loogie Glob.

Infinite replayability: Randomly generated maps, tons of weapons and abilities ensure that every game will be a whole new experience. The game is superdeadly, but you will get to unlock new weapons for your next playthrough. 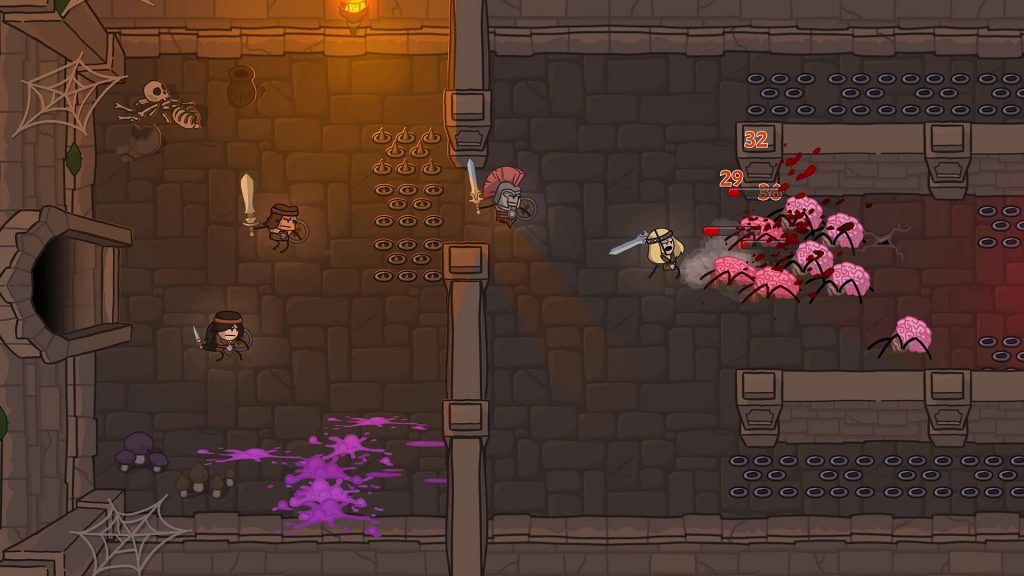 ABOUT FUNCOM
Funcom is an independent developer and publisher of online games for PC and consoles. Funcom has provided outstanding entertainment since 1993 and continues to expand its track-record of more than twenty released games. Titles include ‘Conan Exiles‘, ‘Secret World Legends, ‘Age of Conan: Hyborian Adventures’, ‘The Longest Journey’, ‘Anarchy Online’, ‘The Park’, and ‘Dreamfall: The Longest Journey’. For corporate information please visit www.funcom.com. For information about Funcom games visit www.conanexiles.com, www.secretworldlegends.com, www.anarchy-online.com, www.dreamfall.com, www.theparkgame.com, www.conanexiles.com, or www.ageofconan.com. Funcom is listed on the Oslo Stock Exchange under the ticker FUNCOM.

ABOUT CABINET
The Cabinet group consists of Cabinet Entertainment, a tv/film financing and production company, as well as Cabinet Licensing, a consumer products division which manages and develops global entertainment franchises in all forms of media, including motion picture, television, and the gaming, publishing and toy/collectibles industries. Our portfolio consists of well-known brands such as Conan the Barbarian, Kull of Atlantis, Solomon Kane, Mutant Chronicles, Mutant: Year Zero, and Kult.

ABOUT MIGHTY KINGDOM
Mighty Kingdom delights more than 7 million players every month. We design game experiences from the ground up for brand partners such as LEGO, Disney, Moose Toys, KitCatCo, and more. Our portfolio of original and licensed games are all crafted in our Adelaide studio, by a team with over 100 years of combined experience across game development, film production, illustration, music, and theatre. Led by a desire to engage and delight players, we make emotional experiences that connect our diverse talent with millions of people around the world. We love fun. We want to share it with the world. We want you to be a part of it.

Play all Funcom Conan games for free this weekend